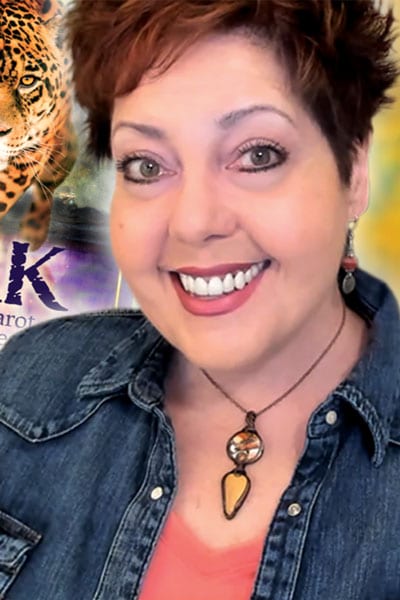 Bernadette King describes herself as a country girl who grew up talking to animals. She’s also a multi-award winning, internationally known evidential psychic medium, Shamanic practitioner, tarot reader, animal communicator, and publisher. Bernadette is the publisher of the Internet’s largest resource for information on Spirit, Totem, and Power Animals. Out of her calling to create that expansive body of work was born The Ark Tarot & Oracle Deck – which raised $50,000.00 during its Kickstarter campaign. The Ark went on to win the prestigious 2019 COVR Visionary Awards’ Product of the Year as well as Best Tarot Deck of the Year. The Ark made history when, in the same year, it won the prestigious CARTA awards for Best Tarot Deck of the Year, Best Aspiring Author Debut, and Best Guidebook Accompanying a Tarot Deck. The Ark is such a hit that a second printing had to be ordered with eight months of its first release. Bernadette’s newest creation is her book, “Spirit, Totem, and Power Animals – The Complete Book of Animal Spirit Guides“. In early 2021 the Kickstarter campaign for the book raised $50,000.00. This 702 page, 8×11, full color book is sure to become the go-to for working and getting into deeper relationship with the Animal Allies and all the natural world. Bernadette will present The Animal Medicine Walk at StaarCon 2022.

Welcome to the Wild Pack! Take an Animal Medicine Walk with Bernadette King; multi-award winning, internationally known evidential psychic medium, Shamanic practitioner, tarot reader, animal communicator, and publisher. Embark on this magical journey and learn new ways of aligning with the Animal Kingdom. You’ll experience Animal Spirit Guide energies like never before. This new ‘method’ was downloaded from the Animal Allies directly into Bernadette. She’s been sharing it all over the world and beginners to adepts are reporting astonishing mystical happenings that are supported by evidence. Part teaching, part journey, part platform reading join with others who want to be in deeper relationship with our brothers and sisters of the wild. Allow their wisdom and power to fill you up and set your spirit free to roam the reality you consciously create.

Bernadette King is the designer of the award-winning “The Ark Animal Tarot and Oracle Deck”. Get ready for a deep dive into animal medicine, divination, inspiration, and the wisdom that has been with us since the beginning of time.