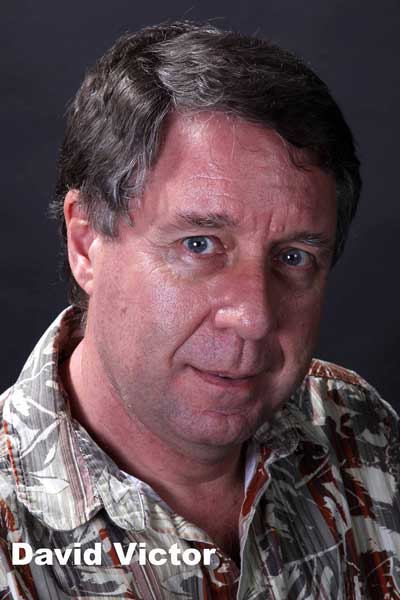 David Victor is a writer, actor, director and broadcaster from Hamilton, Ontario.  Some of his work which has been produced in Canada includes:  the high-tech, multi-media, stage production “The Human Touch” at Hamilton’s Theatre Aquarius as well as a four-city tour, the metaphysical psychodrama “The Return of Michael” and two short dramatic films, “Little Sister” and “Table Stakes”.  Staged readings have included:  the comedy about surviving hard times “The Pizza Chronicles”, and the reincarnation thriller “All Things In Time”.  Since his relocation to South Florida, he has had public readings at Caldwell Theatre in Boca Raton, Actors’ Playhouse in Coral Gables, Mosaic Theatre in Plantation, and Hollywood Playhouse in Hollywood, FL.  On film, the short comedy “A Much Too Open House” won Best Florida Short at the 2005 Ft. Lauderdale International Film Festival plus Best in Show at the 2006 Gem City Film Festival near St. Augustine, Florida.  His short film, “75 Cents”, won Audience Choice for Best Drama at the 2012 Lake Worth Film Festival.  He has also won 3 Telly Awards for corporate videos and television commercials.  On his spiritual side, David is a Reiki Master, Tarot Reader and Psychometrist (Psychic Touch).

Sadly, David passed shortly after StaarCon 2022. He will be missed.

It’s In The Cards with David Victor
StaarCon 2021

This is a tarot-themed virtual dinner theater experience presented at StaarCon 2021. David Victor shares a short play he wrote titled “It’s In the Cards”.

Join us for a tarot-themed virtual dinner theater experience. David Victor will share a short play he has written called “It’s In the Cards”.

Tarot Theater with David Victor and the StaarCon Players

In-person and online attendees will join together to watch a video produced by our very own StaarCon players featuring Kate Mura. What happens when we use tarot to write short plays, and write short plays about tarot? We will find out!